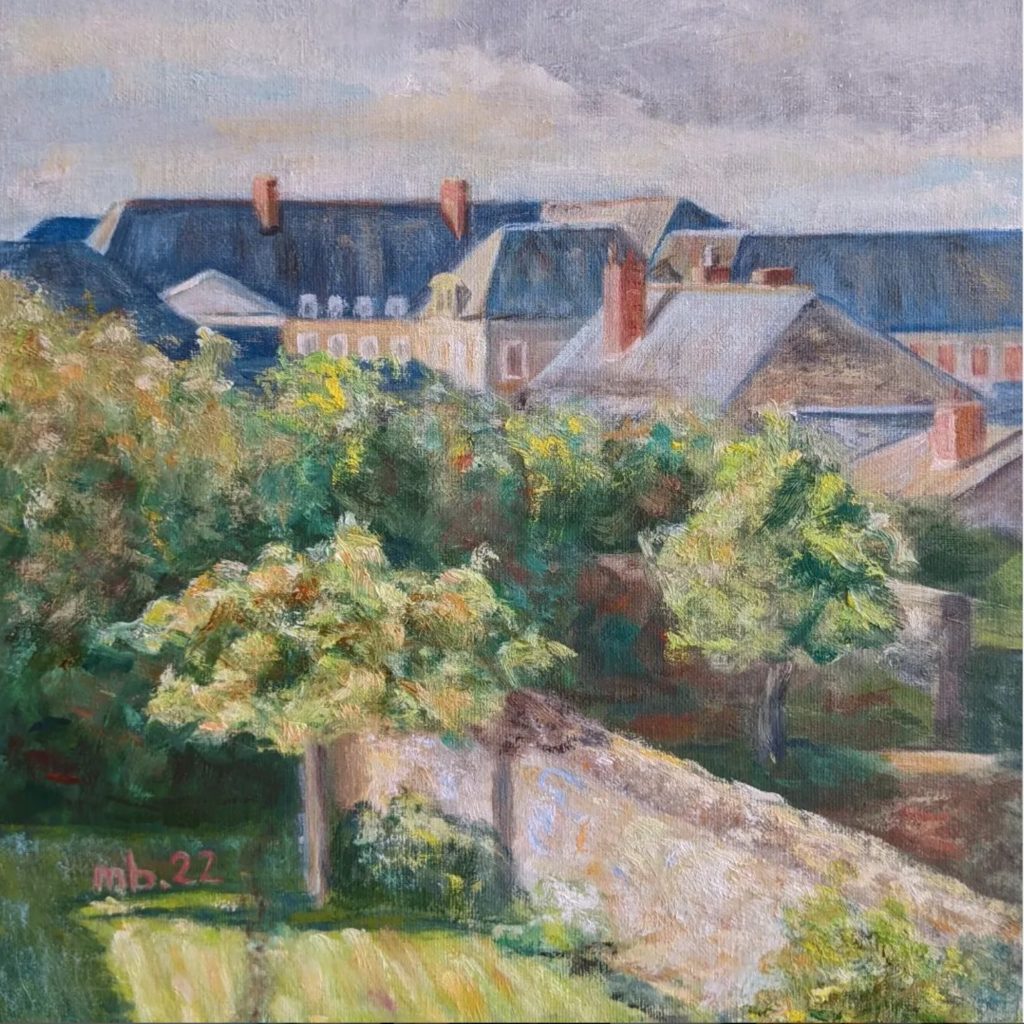 Life is basically a huge collection of moments. Sometimes you have no idea how everything will end up tying together – Marion Buricatu had a lot of those moments, and she definitely never expected Marion’s Workshop to be the result. (As is often said, funny where life takes you!)

Marion was born in the rural town of La Fleche, and grew up surrounded by the ocher wheat fields and dark green forests that make up the French landscape. Academically, Marion oriented herself towards science and received a masters in Geophysics from Pierre et Marie Curie University. She recalls with a chuckle that she excelled at anything visual, like cartography and identifying minerals under telescopes. After graduating, she worked in the environmental management field.

In 2001, Marion and her family moved to the USA. She decided to try her hand at something completely new: painting! She found she had a knack for oil painting, and began painting originals and teaching her own classes in 2011.

As she grew her business, two big themes emerged in her work: France and the USA. Marion was especially drawn to landscapes and scenes of daily life; she would paint American scenes with a French eye, and French scenes with an American eye.

Marion’s life reflects biculturalism and its contradictions. It took an embarrassingly long time for this Eureka moment to happen! But once she realized it Marion began expanding her horizons in the art world, building off this cornerstone. She deepened her technical training and educated herself in art history. In 2015, she started exhibiting and developed a series called “Art Talks,” simple presentations aimed at making art history accessible to all. In 2018, Marion was certified as a docent at the Worcester Art Museum. In 2019, she started teaching with the Hopkinton Center for the Arts, where she works with students of all ages.

Looking back, Marion says it’s incredible how all of those moments came together so well. Her childhood in France, her move to the USA, starting a company based on her cultural duality, and her curiosity to see everyday things with a new eye. Everything added up to create a business that fully embodies Marion – from her French roots to her American life. 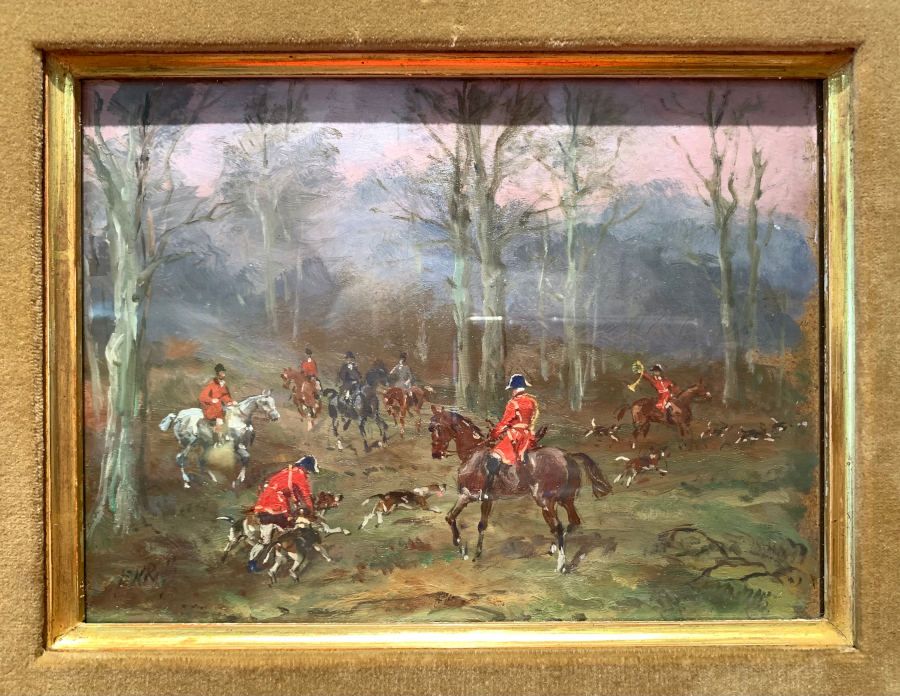 Hunting is as old as humans. And yes, it has always inspired artists to create, whether in the prehistoric times or Middle Ages, or during the Belle Epoche.

Today, hunting is a sport, and its well-defined rules are anchored in Medieval Europe. The subject of this exhibition is a French hunting tradition, which differs from that of the rest of Europe and even the world.

What do you think of hunting? Hunting stereotypes vary depending on people’s location, history, and background. A gentlemen’s sport in the UK, exotic Jeep Safari in Africa, tough guys wearing camo and making a statement with their rifles in the US; French hunting tradition is standing apart and represents a third favorite leisure activity in France. No other country in Europe loves it more! It is still very much the leisure of the French aristocracy and other well-endowed people, though many French hunters these days are representatives of the middle class and farmers. There are more than a million licensed hunters in France.

The season starts in September and ends in February. In France, being the world’s first tourist destination, French hunting has now become one of its attractions.

French hunting, also known as “Chasse a course”, in a way resembles a Foxhunt in the Anglo-Saxon world. Hunters set out in small groups, or “equipage” in French, with dogs, mostly hounds. Each participant has a specific role. Hunters track deer, wild boar, rabbits, etc. The “Chasse a courre” involves horseback riding, but increasingly we see walking hunters and their cars waiting on the side of the road.

There are many ways to interact with nature. Hunting is one of them.

Planning a trip to France? Do you need help to improve your French? Or to finalize your itinerary, and maybe include some hunting experience into it? Leduc Art & Antiques is here to help. Call, email, or stop by the store. 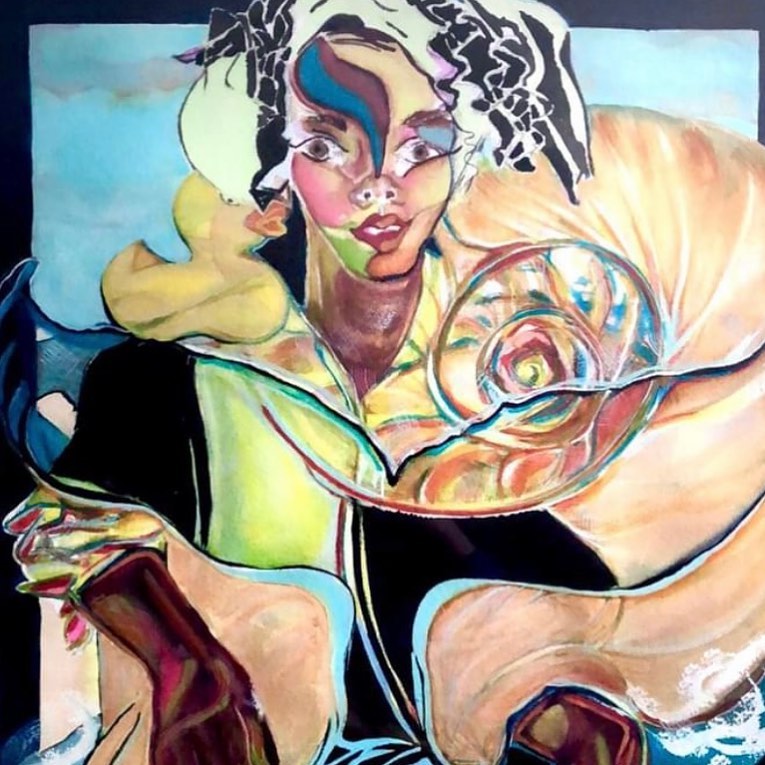 I have enjoyed 30 years of domestic endeavors with my husband and 3 children as we cultivate the joy and appreciation of ordinary lives.

I am a Buddist meditation practioner and study the dharma. A painter who hadn’t painted in 22 years while rearing my children. As I dove back into Art 3 years ago my favorite subjects as always are people and living beings captured with the expressive quality in moments of space and time.

With an emphasis on portrait and the figure as primary subject as they relate with humility and the human experience of sacred endeavor and being.

Transformation of subconscious gossip to meditative mindful ways of being through stillness and mind training. Depiction of every day situations become fertile with imaginative conjuring that plays in our ever present flow of mindstream.. Capturing moments of transition such as the Bardos of dharma. Our moments of awe and reflection, memories and surprise. The ever changing nature of life. Moment to moment and the in betweens of the Bardo. A spiritual practice of appreciation for reality in the phenomenal world. Life as it is and open to change of the ever present familial and ephemeral quality of divine, sacred and regular as the kitchen sink.

Experiences captured and composed with whimsy, humor, tenderness and fearlessness of basic goodness and a touch of irony. Rich with Tibetan symbolism and references for transformation and workability with Angels and Protectors of the dharma. Permission to “Just Be” and the cultivation of Compassion for All sentient beings. May whatever merit that comes from this work go toward the enlightenment of All beings. May the enjoyment of the imagination be like Lucid Dream Yoga where the viewer gets to choose the narrative that resonates for them. 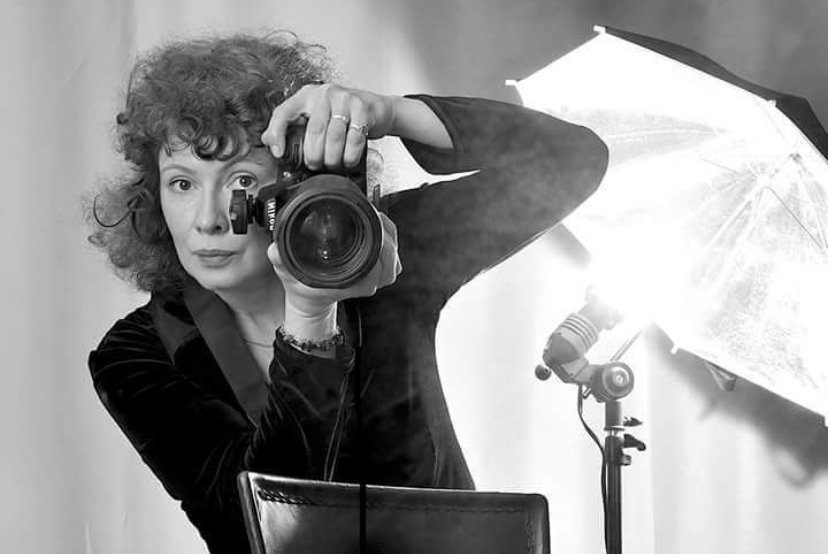 Yuliya Sokol, Franco-Russian artist, specialized in jewelry creation and portrait photography, was born in Saint Petersburg, Russia, while this Venice of the North still called Leningrad. Her family had both artists and engineers, a special mix that taught her to combine art and exact science in her creation process.

Accomplished musician with a degree in violin studies she also earned a Master of Arts in Cinema Studies from the Saint Petersburg’s School of Cinema. While working as Casting Director at Lenfilm Studio she started taking pictures of actors who applied for auditions to better understand their aptitude for a role and to find the best fit for various roles that she worked on. As a result, she acquired a new skill, that of portrait photography. She became the first female photographer at Lenfilm Studio.

Since her move to Paris, France, she has continued her photographic activity. She especially enjoys shooting women’s portraits, and while doing that she has noticed that a correctly chosen jewelry can put a finishing touch to any portrait. That was a starting point in her interest in jewelry creation.

Most recently Yuliya has been working on her necklace collection made of crystals and threads or chains. The crystals that she uses are a combination of quartz sand and other minerals, which help maximize the reflection, a method similar to that of Swarovski. The length of the necklace can be easily adjusted on-the-go. Thanks to the material used and simple but elegant design, necklaces can equally fit an everyday outfit as well as a sophisticated “black tie” dress reserved for special events.

This particular collection is made of black and white crystals, inspired by famous summer white nights and long dark winter nights in Saint Petersburg.